GUMS | You were not the Imposter
17755
post-template-default,single,single-post,postid-17755,single-format-standard,ajax_fade,page_not_loaded,,qode_grid_1200,qode-theme-ver-9.1.3,wpb-js-composer js-comp-ver-4.11.2.1,vc_responsive

You were not the Imposter 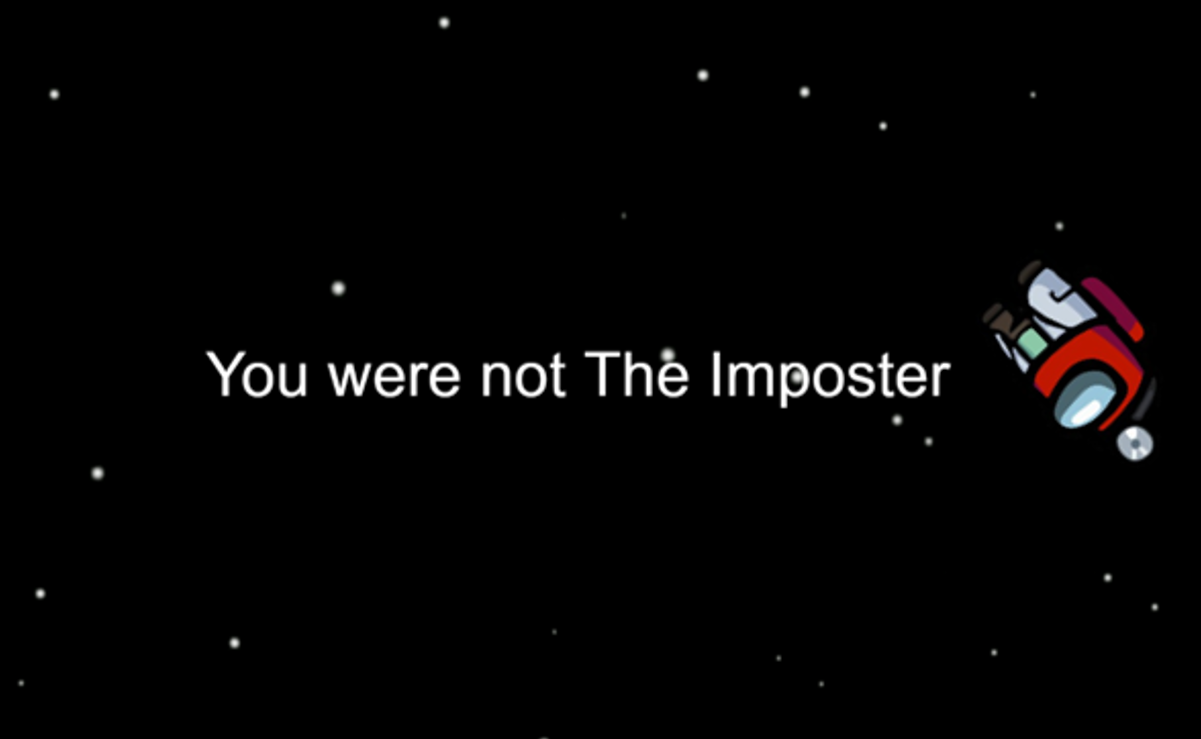 07 Apr You were not the Imposter

If you’ve been on the internet or social media at any point in the past year or so, you’re probably familiar with Among Us. You know – the game where you play as a colourful little astronaut character (a Crewmate) on an abandoned spaceship, trying to complete your tasks and keep the ship running. Oh, and also trying not to get sabotaged or killed by an Imposter in your midst.

I started playing Among Us with my family a few months ago, mostly as an excuse to spend time together since I’d moved out. There’s something incredibly relaxing about zipping around as a Crewmate to complete whichever novelty task the game assigns you to; my personal favourite is swiping the access card – but watch out, unless you do so at the exact right speed it doesn’t work. However, when you get assigned as an Imposter you can’t actually complete tasks, and there’s something uncannily familiar about faking them to avoid getting caught.

Anyone who has experienced imposter syndrome – the persistent fear, despite evidence to the contrary, that they have tricked others into believing they are more skilled than they actually are constantly at risk of being exposed as a fraud – in real life might be able to see where I’m going with this.

Studies around the world show that imposter syndrome is pretty much endemic in medical schools (usually estimated as affecting around half of all students but sometimes as high as three quarters). And with the consensus being that it is more likely to affect high achieving individuals in competitive environments, it’s not hard to see why.

To put it bluntly, going through medical school can feel an awful lot like being an Imposter. The first time you stumble through taking a history. Your first time conducting an abdominal exam, nodding sagely while percussing the liver despite hearing absolutely no change in sound. Getting lost on your first day at the hospital. And your second. And your third. Sometimes it’s as though you’re going through the motions with a red neon sign above your head and at any moment someone could notice and throw you out of the airlock, so to speak.

It’s admittedly not a perfect metaphor; for one, I’m yet to encounter a situation where I’m afraid of getting decapitated by a fellow medical student (although we’ll see if I change my tune by the time surgery rotations come around). On a more serious note, while being the Imposter in Among Us rarely has consequences any more serious than mock outrage from family members after a particularly crafty sabotage, imposter syndrome can take a significant toll on mental health if not addressed.

So, let’s address it. Based on statistics alone the odds are that a significant percentage of the people around us are experiencing imposter syndrome as well. And we can’t all be imposters. That’s not how the game works!

Furthermore, and hear me out on this one… some level of self-doubt is kind of an important trait to have as a doctor. Second-guessing diagnoses, questioning your understanding, asking for an expert opinion – all of these things provide us with ongoing learning opportunities and make sure we’re giving our patients the best outcome we can. And when you look at it that way, a bit of uncertainty seems a lot like just a symptom of caring about your future patients.

Finally, when everything gets too overwhelming there’s something to be said for treating medical school a bit like a game. The more you talk to people, the more you realise that not only are there a lot of others only pretending to know what they’re doing, anyone who’s teaching is well aware of this fact. There’s no expectation to know everything straight away and no patient lives at stake, so go ahead and fake that task. You never know, maybe the next time you try will be the time you don’t have to fake it at all.

Interested in writing for the GUMS blog? Email our Publications Officer, Ashraf, at ashraf.docrat@griffithuni.edu.au